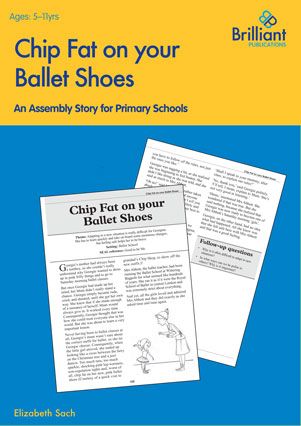 Chip Fat on your Ballet Shoes

Young Georgie has gotten used to using her temper to get her own way. When she decides she wants to take up ballet lessons her mother is not so sure. A short while and a tantrum later and the ballet classes are booked, and (much to her delight) Georgie is free to select the most garish of garments to make up her uniform – whatever Georgie wants, Georgie gets. In an animated bubble, she is eager to show off her new outfit- and she goes to visit her Grandad’s Chip Shop to do exactly this…resulting on chip fat dripping on her brand new pink ballet shoes.

This does not impress ballet teacher Mrs Abbott, who is even less impressed to note Georgie’s lateness and her unconventional uniform. When she reprimands Georgie for such, she is taken aback by Georgie’s petulance. Georgie reaches for her failsafe- a temper tantrum. Assessing the situation quickly, quietly and serenely, Mrs Abbott chooses to make amends with Georgie. Her refusal to be antagonized by Georgie’s outrage comes as a surprise to Georgie who makes it plain that she doesn’t like being told what to do, but is reluctantly becoming more receptive to Mrs Abbott’s suggestions. When she agrees not to wear her ballet shoes outside again- Mrs Abbott acknowledges that a breakthrough has occurred. Georgie too recognises that something feels different- she feels secure and she is truly ready to try to be a proper ballet dancer.

This primary school assembly story demonstrates to children that there is a sensible way to attain what they want to- without being rude and causing upset in the process. Mrs Abbott’s admirably calm contempt for Georgie’s bad manners teaches Georgie, and the children listening that stroppiness will get them nowhere. Learning to be cooperative rather than manipulative like Georgie is an important lesson for children to encounter early on so that they can grow into reasonable, good-natured people that recognise how to speak to others kindly and properly, and handle things the right way.

This story focuses on manners and comes from More Brilliant Assembly Stories, written by Elizabeth Sach and published by Brilliant Publications.