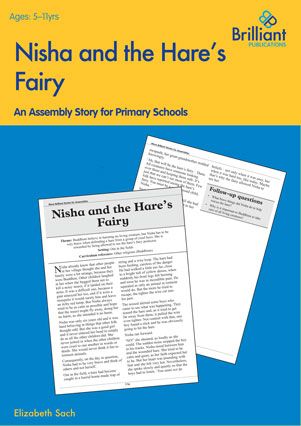 Nisha and the Hare’s Fairy

This primary school assembly story touches on the pacifism as an intrinsic aspect of the Buddhist religion. Six-year old Nisha spies a hare caught in a wire trap and dashes over to try and help it. The anguished noises the hare is making attract the attention of a group of older boys. Their initial beguile becomes barbarous when one finds a stick and the gang begin taunting the poor hare. Summoning every ounce of courage she can find, Nisha steps between the creature and the boys and commands them to stop their brutish actions. She tries to make them see how cruel they are being but they treat this as a challenge and she grows more afraid. It is only when what she believes is a fly tickles her and she chooses not to swat it – maintaining loyalty to her belief in protecting all living beings, that she decides to tap into the groups’ moral compass and selfish concerns- asking them to put themselves in the hare’s shoes, so to speak, and imagining that they don’t matter enough to be helped. The very idea of being pained, tormented, and abandoned themselves forces the boys to change their tune. Shocked also by the effect a little girl has had on their resolves, the gang flees- leaving this ‘little girl’- the bravest of them all- to attempt to rescue the hare once again.

Thrashing around, the hare is too frightened, and too frenzied for Nisha to go near. Just when it seems as if this is going to be an impossible task Nisha spots what she had thought had been the fly- except it is brightly coloured and appears like a fairy. The fairy settles itself upon the wounded hare’s back and it is instantly as if the hare has been tranquilized, enabling Nisha to step forward and free it from the trap. Upon the healed hare’s departure, Nisha receives an admission of gratefulness from the little fairy- much to her joy. She tells her Great-Grandmother the tale and is told she is blessed- Nisha is proud to admit that she has put others first, been caring towards all living beings, and stayed true to her faith.

When children listening to this story recognise that Nisha has been rewarded for her selflessness and kindness they will feel inspired to do the same. Nisha’s attitude derives from her need to not let other living beings come to harm- correlating to Buddhist teachings about right livelihood, karma and the equal importance of all creatures. This provides links to the primary school Religious Education curriculum. Nisha’s bravery and zest are also encouraging to children as this demonstrates that you don’t have to be big and strong to be powerful. This will give young children the confidence they need to stand up for what they believe in, and for what is right.

This story focuses on friendship and is based on the theme of humanities. It comes from More Brilliant Assembly Stories, written by Elizabeth Sach and published by Brilliant Publications.