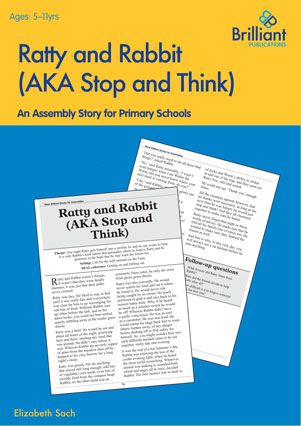 Ratty and Rabbit (AKA Stop and Think)

A rat and a rabbit become unlikely friends in this assembly story for primary schools. Sly Ratty gets into a spot of bother one night when he gets caught in a trap. Rabbit is just minding his own business when he hears the whining of an animal in pain, and is alarmed to discover the source of the cry: the devious Ratty. Much to Ratty’s surprise, Rabbit offers his own assistance but quickly realises he may not be of much use so he goes to fetch some of his friends.

When Rabbit returns alone, and disheartened, Ratty is in despair. He also becomes guilty and regretful when he learns that Rabbit’s friends are refusing to help because Ratty upset each of them at some time-by being a greedy thief! He realises that if he carries on being wicked then he will never have any friends. After vowing not to be sly or greedy any more, Rabbit’s friends arrive trusting Ratty to stick to his word, and to ‘stop and think’ before stealing their food again. They combine forces to free Ratty, and before long – all is well.

This story demonstrates to children that even when someone has mistreated us in the past, we should give them a second chance and treat them with kindness.

Like Ratty does, listeners will learn that they should treat others how they would like to be treated by others, in order to make friends. Rabbit’s willingness to help Ratty regardless of all preconceptions posits him as unwaveringly kind, and so he is the hero of the story, inspiring children to adopt a similarly non-judgemental good nature.

Listeners will also recognise the prevalence and power of teamwork as Rabbit and his friends use their various strengths to succeed together – encouraging children to actively seek out friendships and unite to help others always.