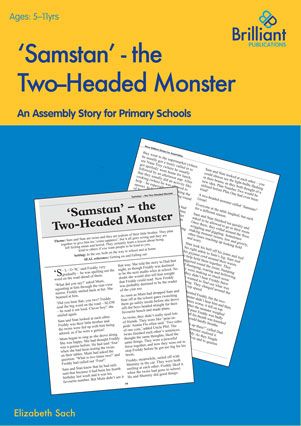 Identical twins Sam and Stan are growing increasingly agitated by their clever little brother Freddy and his constantly being doted on. The boys envy the attention, praise, and treats Freddy receives and consider it unfair that they don’t seem to get the same. The one thing that irritates Sam and Stan more than anything else is the fact that their mother is always calling Freddy a genius. Rather immaturely, they decide they want to punish Freddy for this- and what better way than to make him look silly? When it becomes apparent that Freddy hasn’t quite distinguished that his twin brothers are separate people, Sam and Stan strike and tie themselves together to form ‘Samstan – the Two-Headed Monster’! The boys are so amused by their own plan though that they do not realise Freddy has come to see them and so they trip and fall on him, crushing him under their combined weight. They quickly become fearful that they might really have hurt their little brother.

This primary school assembly story about rivalry and envy is taken from More Brilliant Assembly Stories written by Elizabth Sach and published by Brilliant Publications.

At this point Freddy acknowledges that he actually has two brothers and becomes overwhelmed. The trio’s father enters and assesses the situation, having noticed the twins’ jealousy. He encourages them to realise that everybody is good at different things, and that they should support each other rather than resent that fact. In doing so, they should be setting a good example to young Freddy. Sam and Stan come to understand that the only monster really affecting anybody is not Samstan, but the green-eyed monster- and they realise that they need to stop succumbing to their jealousy and being mean.

Primary school children listening to this assembly story may relate to the feelings of rivalry and envy that Sam and Stan experience, but they will be able to identify that their decision to trick Freddy was wrong. This story will help children to realise that everyone has strengths in different ways – encouraging them to stop comparing themselves to others and helping them to avoid being jealous. Like the twins do, listeners will learn that it is always better to choose kindness over meanness.