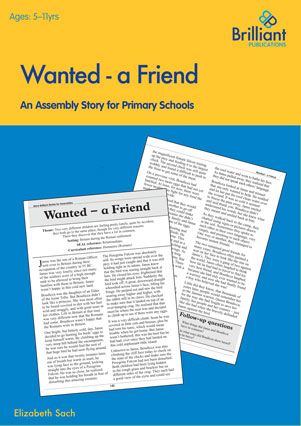 This assembly story contains strong references to Roman History as part of the History curriculum for primary schools. It is 55 BC and Janus (a Roman Officer’s son) has travelled to Britain during the Roman occupation. Battling the British winds in the great outdoors, he is hunting alone for bird’s eggs for sustenance when he encounters a Peregrine Falcon.

As soon as the magnificent bird takes off (rabbit-for-dinner in tow), a somewhat bedazzled Janus decides to climb the crag in search of the falcon’s eyrie – he is of course, after her eggs.

Unbeknownst to him young Princess Boudicca of the Iceni Tribe is also hiding in the brush on the crag, overlooking the nest to monitor the Peregrine chicks she had seen on a previous venture. The falcon mother has arrived at the nest and is feeding her chicks, leaving both Janus and Boudicca in awe, lying in wait on opposite sides of the crag. They are separately hoping for the mother to depart so that they can get closer to the eyrie.

His cry startles and antagonizes the falcon and she swoops down towards him to attack- gashing his face with her claws as she passes. Before she can do any more damage, Boudicca springs out fearlessly from her refuge armed with a large stick and goes forth to terrorize the predator. Acknowledging that she is outnumbered, the Peregrine Falcon retreats- leaving Janus and Boudicca free to flee the area. The pair arrives upon a stream where Boudicca uses natural resources to nurse Janus and soothe the trauma to his face. It becomes quickly apparent that they cannot speak the same language but they find paralinguistic methods of communication use mime and drawing to interact and bond over their common ground. From this encounter with a Peregrine Falcon, an unlikely friendship between the Roman Officer’s son and Princess of the Iceni tribe is born and blossoming.

This assembly story demonstrates how two very different people can create a unique relationship by chance, and by simply making the effort to pay attention to one another. Boudicca is rewarded for her courage and unbounded kindness with a friend who appreciates her fierceness. Janus is rewarded for his trusting and perseverance (despite preconceptions) with a sidekick. Children listening to this story can perceive that when people look past their differences and try to get to know somebody for who they truly are they can build truly special friendships and unity. Children are also reminded “no act of kindness, no matter how small, is ever wasted.”

This story about communication and friendship comes from More Brilliant Assembly Stories, written by Elizabeth Sach and published by Brilliant Publications.

Be the first to review “Wanted – a Friend” Cancel reply