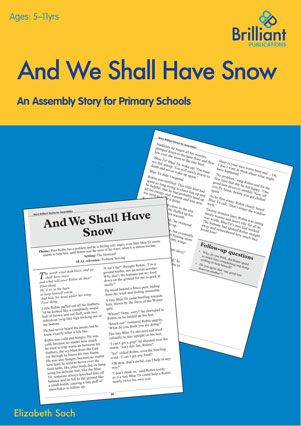 And We Shall Have Snow

In this assembly story the once irritable and hungry Robin learns how to defeat his self-piteous tendencies and put others before himself. “Cold and hungry” in the winter chill, and frustrated by his inability to access food, he is initially bad-tempered and rejects, moreover scorns all goodwill offered to him in favour of the miserable and irate state he is familiar with.

Tiny Blue Tit overlooks this and persists with proffering his own assistance despite his feeble stature. Still, Robin is stiff-necked and Blue Tit is soon whisked dangerously away by harsh winds, only to sadly proclaim his despair for Robin before falling asleep in the cold, never to make it safely home.

Whilst he would never before have admitted it, the disgruntled Robin is touched by Blue Tit’s kindness and when he notices poor Blue Tit unconscious and frozen a short distance away he uses the warmth of his own tiny body to resuscitate him. Awake, and alive, tiny Blue Tit is so grateful for Robin’s surprising tenderness that Robin is once again affected. He abandons his umbrage and takes the advice Blue Tit gave him and is rewarded with plentiful food supplies and care from nearby humans.

This primary school assembly story about one good turn deserving another is taken from More Brilliant Assembly Stories written by Elizabth Sach and published by Brilliant Publications.

Primary school goers are reminded that “one good turn deserves another” and learn of the process of Karma. This tale teaches them that if they choose kindness over self-indulgence then they will reap the benefits.

They can learn that it feels good to treat others with tenderness and that those they have been kind to will be far more likely to help them when they most need it, encouraging children to maintain good-naturedness.