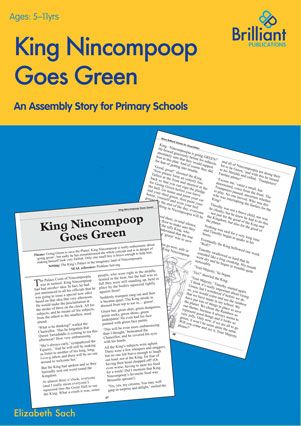 In this light-hearted primary school assembly story, King Nincompoop attempts to persuade his Palace Court to “Go Green”… literally. He has misinterpreted the famous slogan, and after deciding to adorn himself completely in the colour green he asks for his followers to mimic him.

His idea is met with much scorn from the citizens of Nincompoopia, who are both amused and embarrassed for him. Rather than anyone pointing out the flaw, the King’s Subjects stand around and tittle-tattle. All but one, that is. A small boy named Timothy summons all his courage and every shred of advice he knows in order to help King Nincompoop understand that there are alternative routes that he can embark upon in order to successfully establish his Kingdom as eco-friendly. King Nincompoop is receptive to this idea and Timothy’s assistance is gratefully accepted, meaning nobody has to paint their lives green, but a step towards saving the planet has been taken.

This story about helping others when they make mistakes comes from More Brilliant Assembly Stories, written by Elizabeth Sach and published by Brilliant Publications.

Although he is initially befuddled, King Nincompoops’s dedication to attaining an environmentally friendly status for Nincompoopia is inspiring for young children who may not be so attentive to the needs of the planet yet. Timothy’s various suggestions for how to be green may also alert and educate listeners on the little ways that make a difference reinforcing the importance of keeping today’s world eco-friendly.

In this tale, Timothy relies completely on his own knowledge, inspiring listeners to adopt similar standards of resourcefulness. This tale also teaches primary school children that when they notice another’s mistake, instead of being malicious and mocking it, they should have good nature and help out when they can – “Kindness and faithfulness keep a king safe, through kindness his throne is made secure.”

Oppositely, the King’s willingness to receive Timothy’s correction is a good example to children as it encourages them to be unafraid to accept help when it is given. The King is prevented from complete embarrassment because he lets Timothy guide him to the right idea. The positive resolution to the tale urges children also to have conviction in their ideas, and urges them to stand up for all that they truly believe in.