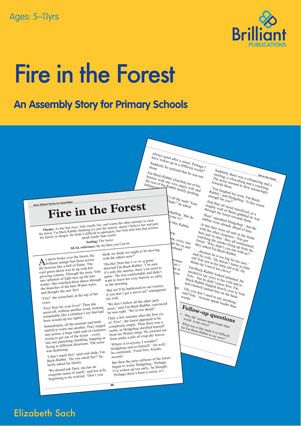 Fire in the Forest

When Vole awakes to see a fire strike the forest, she hurriedly informs all the other animals. Terrified, they all run frantically to safety…all that is, except for Fat-Buck-Rabbit who is certain that Vole is mistaken and instead ridicules her. When Hedgehog awakes he is alarmed to note that he is relatively alone- except for Fat-Buck-Rabbit and his concerned family. Hedgehog asks after the rest of his forest friends and is informed by a derisive and incredulous Fat-Buck-Rabbit that they have fled because of the fire. Fat-Buck-Rabbit’s laughter dies down quite quickly when he sees flames moving towards him and his family at a mighty pace.

Before long the Rabbits and Hedgehog have rejoined their fellow creatures- safe and sound. It is now up to Fat-Buck-Rabbit to apologise for his mockery- he put his family in serious danger because of his arrogance. Fat-Buck-Rabbit cannot pluck up the courage to verbally admit his wrongdoing. Shocked, sheepish, and having learned his lesson, he settles for a pat on Vole’s back to seek forgiveness for his unkindness. Fat-Buck-Rabbit realises that he put his ego before his family and this makes him feel stupid.

This assembly story is taken from the book More Brilliant Assembly Stories for primary schools, written by Elizabeth Sach and published by Brilliant Publications.

Fat-Buck-Rabbit is ashamed because he knows how lucky he is that he and his family managed to escape-and had he listened to Vole in the first place there wouldn’t have been reason to panic. He had been somewhat sceptical of paying any attention because of his prejudice towards Vole- dismissing her as foolish, ‘Little Old Vole’.

It can sometimes be hard for people to accept help/direction from those they consider to be inferior to themselves, and this story demonstrates that this is not the way it should be- listeners can observe that they should be open to all offers of help, no matter where it comes from- and that being too callous and arrogant can be of detriment to themselves and others.

This story will alert children to the danger of fire and encourage them to be more humble, openhearted, and to listen.

Be the first to review “Fire in the Forest” Cancel reply