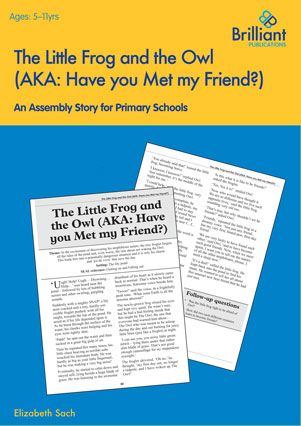 The Little Frog and the Owl (AKA: Have you Met my Friend?)

When the little frog first metamorphosises he is full of energy and excited to test out his new legs. This is all well and good until all his splashing rouses The Owl – something he was strictly warned against doing when he was still a tiny tadpole. The little frog is petrified of the apparently villainous predator The Owl and attempts to hide.

Whilst somewhat irked by his disrupted sleep, The Owl reassures the little frog that he will not eat him, but demands to know why he has been so rudely awoken. The little frog explains that he panicked underwater and the wise Owl softens, wishing to comfort the froglet.

After a time conversing, Owl has grown tired but asks his newfound amphibious friend to come back and speak to him again. The little frog is very keen, almost as keen as he is to swim and tell his mother that The Owl isn’t so scary after all.

This primary school assemby story about forgiveness and compassion is taken from More Brilliant Assembly Stories for primary schools, written by Elizabeth Sach and published by Brilliant Publications.

This sweet assembly story demonstrates the importance of forgiveness, compassion and listening. Both The Owl and the little frog shed all prior prejudices and make the effort to actually listen to each other, and in doing so they realise that they make great friends.

This story is great for primary school children to understand that sometimes people say unkind things about others that aren’t necessarily true – and that they don’t always need to believe these things.

Often, children are a bit scared of those who they see as different to themselves – like the frogs are so afraid of The Owl. In this tale, the little frog learns that he has no reason to fear Owl. Children listening can be encouraged to avoid making judgements on others before getting to know them, and also, to be more welcoming of diversity.

Be the first to review “The Little Frog and the Owl (AKA: Have you Met my Friend?)” Cancel reply